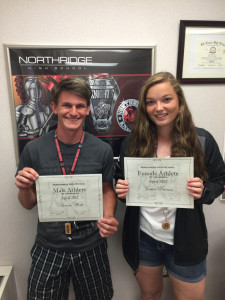 Congrats to our April Athletes of the Month Jessica Petersen and Bowen Work.

Jessica was nominated and selected from our Softball Team.  She has had a really good month of April leading the team in many statistical areas.  Coach Fatongia had this to say about her “She is always positive and willing to be coached.  The team looks to her to get them started when morale is down a little.”

Bowen was nominated from our Tennis Team.  He had a 5-1 record in Region 1 #1 Doubles Play, he was voted a team captain.  Coach Graff had this to say about him “Bowen takes lead role working with team members to encourage and improve technique, he frequently assists me by feeding balls to players during practice.”  Bowen just finished the Region Tournament finishing in 2nd place and Qualifying for State.

No Events This Week

Events are added by athletic staff.
View All Events